Offshore Wind: Introduction of a New Scheme for Interconnection

Under the Act on Promoting the Utilization of Sea Areas for the Development of Marine Renewable Energy Power Generation Facilities (Act No. 89 of 2018; the “Offshore Renewable Energy Act”), enforced on April 1, 2019, offshore wind projects in general sea areas are to be conducted by operators selected through a public bidding process for Promotion Zones that are designated by the government (Minister of Economy, Trade and Industry and Minister of Land, Infrastructure, Transport and Tourism (the “Ministers”)).  The government has already designated several Promotion Zones; ten other zones have been identified as “having progressed to a certain stage of preparation” for potential designation, with four of these having been further recognized as “promising zones”(“Promising Zones”) for potential designation as Promotion Zones (zones other than Promising Zones that have “progressed to a certain stage of preparation,” referred to as “Preparatory Zones”)(see map below).  In promoting the introduction of offshore wind projects through this regulatory framework, the government is now discussing a new scheme for securing grid connections, which has been one of the major issues in the offshore bidding process under the Offshore Renewable Energy Act. 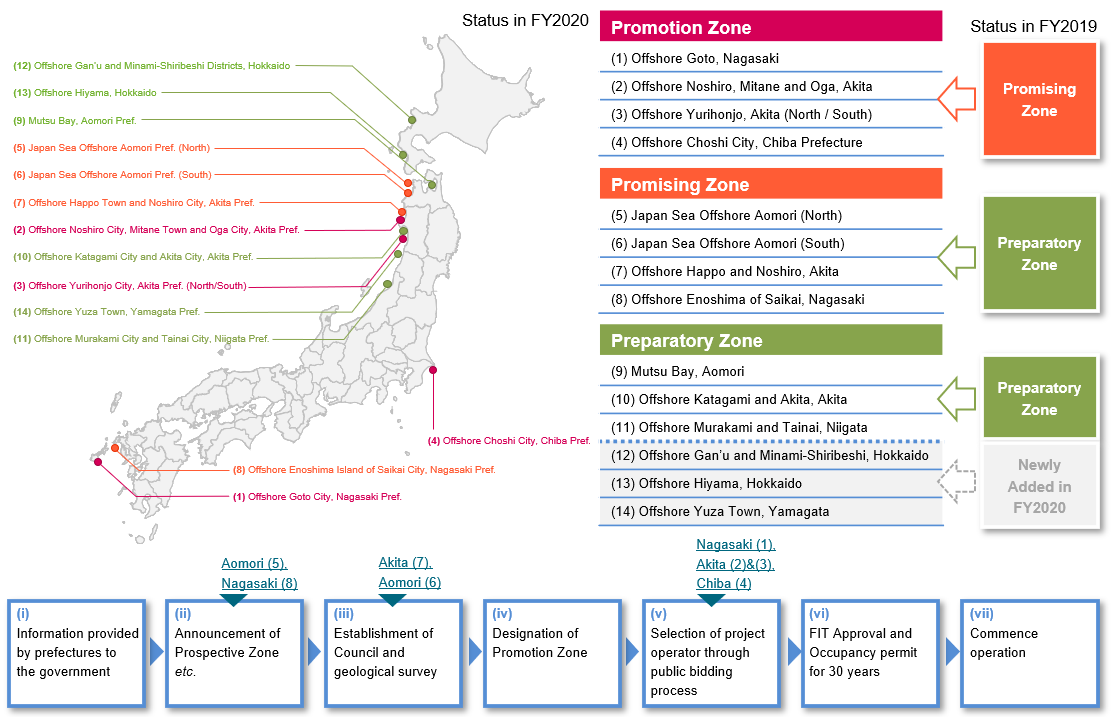 Source: Agency for Natural Resources under METI and Ports and Harbours Bureau under MLIT “Review of Matters Based on Operation of the Offshore Renewable Energy Act” (material prepared for the expert panel held on February 17, 2021), p. 4.

Pursuant to the Offshore Renewable Energy Act, a grid connection must be “expected to be appropriately secured” for a certain zone to be designated as a Promotion Zone by the Ministers (Offshore Renewable Energy Act, Article 8.1(4)).  Specifically, under the current “Promotion Zone Designation Guidelines for Offshore Renewable Energy Facilities” (released on June 11, 2019; Promotion Zone Designation Guidelines”), an offshore wind operator in the zone must secure grid capacity and express an intent to provide such capacity to the public bidding process (meaning that such capacity must be succeeded to the winning bidder in the event of an unsuccessful bid).  One problem with this system is that the output of the project conducted in a Promotion Zone is limited by the amount of grid capacity that has been secured by the individual project(s) wishing to participate in the bidding process.  Another problem is that if multiple potential offshore wind operators independently secured grid capacity for the same project in the same zone, they may end up securing more grid capacity than actually necessary.

To resolve these issues and improve grid efficiency, the expert panel under the Ministry of Economy, Trade and Industry (“METI”) and another expert panel under METI and the Ministry of Land, Infrastructure, Transport and Tourism (“MLIT”) have discussed a framework under which grid capacity will be provisionally secured through government request.  Specifically, if the government, based on information provided by a prefectural government or businesses before designation as a Promising Zone, finds that a certain zone has the potential to be designated as a Promotion Zone but is missing secured interconnection capacity for such project, the government will then conduct a preliminary survey by inquiring with the relevant general power transmission and distribution services operator (“TDSO”) about the feasibility and costs of interconnection, and, in preparation for designation as a Promotion Zone, submit a request to the Organization for Cross-regional Coordination of Transmission Operators (“OCCTO”) to have the appropriate grid capacity provisionally secured by the relevant TDSO (see chart below).  METI and MLIT have also proposed a framework whereby a collective interconnection examination process (in which adjacent power generation projects wishing to be interconnected to the grid collectively agree to share costs for enhancement work) and the public bidding process under the Offshore Renewable Energy Act can proceed simultaneously in the event that grid enhancement is required to secure the appropriate grid capacity for such offshore wind project in the zone under consideration. 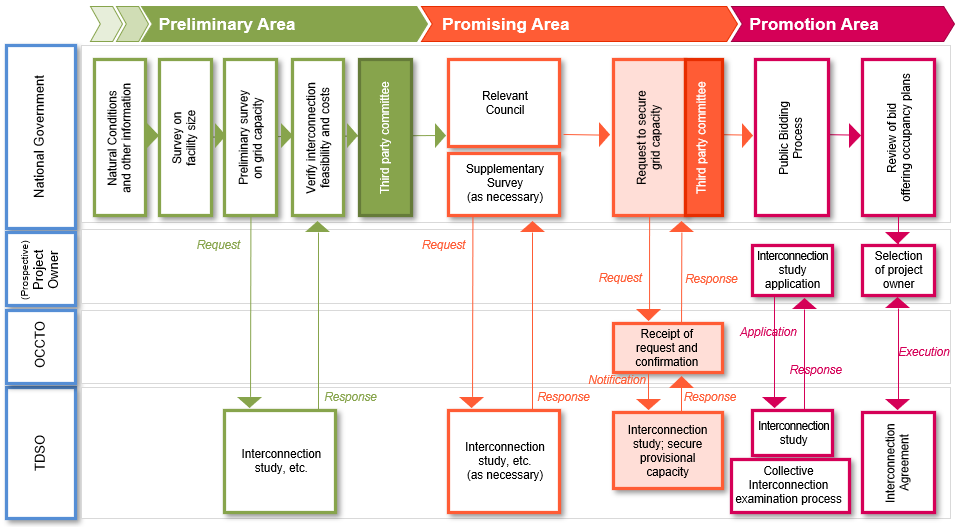 Source: Agency for Natural Resources under METI and Ports and Harbours Bureau under MLIT “Review of Matters Based on Operation of the Offshore Renewable Energy Act” (material prepared for the expert panel held on February 17, 2021), p. 43.

OCCTO is also currently in the process of revising its Operational Rules and Network Codes to reflect the proposed systematic changes: upon receipt of government request, OCCTO must provide a notice to the TDSO with instructions to secure capacity and conduct an interconnection study, and such TDSO must carry out the instructions and provide a response to OCCTO that will then be forwarded back to the government (see here; provided only in Japanese).

The bidding process currently ongoing for the Promotion Zones will remain unchanged, where grid capacity has already been secured by individual offshore wind operator(s) who expressed an intent to provide such capacity for the bidding process.  The above new scheme of securing grid capacity through government request is expected to be applied to Promotion Zones that are designated in the future.  METI and MLIT have indicated that relevant rules will be reassessed and the commencement of implementation of the new scheme will be announced at a later time.

In the northern areas of the Tohoku region, where there is strong offshore wind potential (several Promotion Zones, Promising Zones and Preparatory Zones are already designated in the region), considerable grid capacity has already been secured by multiple offshore wind projects through the interconnection bidding process conducted by the regional TDSO and OCCTO for northern Tohoku (“Tohoku Bidding Process”).  Considering such, METI and MLIT suggested that such interconnection capacity should be utilized first for the Promotion Zones for which the offshore wind operator expresses an intent to provide such capacity secured through Tohoku Bidding Process, and if additional grid capacity is required, such additional capacity could be secured through the above government request scheme or a non-firm connection scheme (see section 3 of Japan Renewable Alert 53).

Although the new scheme will not solve all of the roadblocks, it is a big step forward to further expand  offshore wind in Japan.  Developers of offshore wind projects need to continue to closely monitor the discussions on the newly proposed scheme and make their voices heard in an effective way as it can greatly impact decisions related to offshore wind business, including securing grid capacity.