For our 20th episode, Public Policy Podcast host Rob McKenna talked with Washington, D.C., Attorney General Karl Racine. Join us as we discuss his experience as the first elected Attorney General in the District of Columbia and, as President of the National Association of Attorneys General, his groundbreaking initiative to combat hate and hate crimes nationwide. 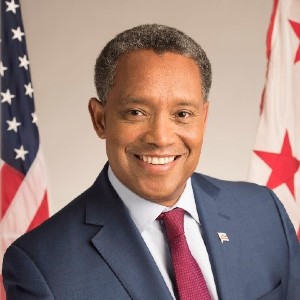 Karl A. Racine was sworn in as the District of Columbia’s first elected Attorney General in 2015 and was reelected to a second term in 2018. Attorney General Racine is honored to serve again and will use the next four years to expand work on priorities, including preserving affordable housing, employing evidence-based juvenile justice reforms, cracking down on slumlords, holding unscrupulous employers accountable for wage theft, and protecting consumers from scams and abusive business practices. He is also committed to making investments in new efforts to protect seniors and other vulnerable residents, interrupt violence in the District, address childhood trauma, and more.

Through his work as president of the bipartisan National Association of Attorneys General and as Chair Emeritus of the Democratic Attorneys General Association’s Executive Committee, Attorney General Racine also speaks out for D.C. autonomy at the national level and pushes back against federal government policies that harm District residents.

Attorney General Racine draws on over 25 years of legal and leadership experience in his work on behalf of District residents. Over the course of his career, he has worked at the D.C. Public Defender Service, where he represented District residents who could not afford a lawyer, served as Associate White House Counsel to President Bill Clinton, and worked on criminal cases and complex civil litigation at private firms. While in private practice, he was elected managing partner of his firm, Venable LLP, and became the first African American managing partner of a top-100 American law firm.

Born in Haiti, Attorney General Racine came to the District at the age of three. He attended D.C. public schools, including Murch Elementary, Deal Junior High, and Wilson High, and graduated from St. John’s College High School. He earned a B.A. from the University of Pennsylvania, where he was captain of the basketball team, and a J.D. from the University of Virginia School of Law, where he volunteered in a legal clinic supporting the rights of migrant farm workers. His commitment to equal justice was inspired by his parents, who fled authoritarian rule in Haiti to start a better life in the United States, and by the lawyers of the Civil Rights Movement, who used the law to make positive social change.

Outside of his official role, Attorney General Racine remains involved with a variety of causes, including youth literacy and mentoring.