“We’re reinventing girlhood as we know it.” 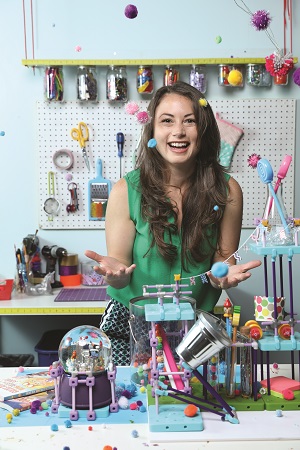 If stubborn conviction is the hallmark of a successful entrepreneur, then Debbie Sterling is destined for greatness. As she builds a multimedia empire aimed at “reinventing girlhood as we know it,” she’s been paving her own way in the worlds of retail and entertainment.

Disturbed that she was one of only a small minority of women in her mechanical engineering program at Stanford University, Sterling embarked on research into the gender gap in STEM. She became convinced that the root of the problem lay in childhood, when girls are steered toward princess toys while boys are given construction sets. Her GoldieBlox construction sets teach engineering skills using a storytelling technique that appeals to girls. In books accompanying the sets, the ever-curious “Goldie” solves problems by devising simple machines.

The toy industry wasn’t receptive to Sterling’s prototypes. “Everyone I spoke to told me even though it was a noble cause, it would never go mainstream and it wouldn’t sell because boys like building and girls like dolls—and that you can’t fight nature,” she says.

After tapping her own savings and raising a seed round, Sterling turned to Kickstarter to crowdfund her first production run. Her Kickstarter video went viral, and within three months, she had raised almost $1 million in pre-orders from GoldieBlox. Within just six months, GoldieBlox was in Toys ‘R’ Us stores across America. The success forced Sterling to scale up production at a pace she had never expected.

Sterling had tapped into a widespread anxiety among parents that their girls were in danger of being left behind by the new economy. Clever GoldieBlox videos illustrating the gender gap went viral. GoldieBlox became the first start-up with a Super Bowl commercial and a float in the Macy’s Thanksgiving Day parade. And Sterling herself was recognized by President Obama and the National Women’s History Museum for her work inspiring girls.

But Sterling knew that it wasn’t enough to have parents rooting for Goldie; she needed kids to clamor for her as well. And getting buy-in from kids required more than just having toys in the stores.

“The way kids play today, it’s rare they’ll fall in love with a toy,” Sterling says. “They fall in love with characters and brands and stories, and they want to play the story. Year after year, the most popular toys are tied to an entertainment property. Big brands in the toy space have the digital experience, the physical toy experience, and the content—the shows and cartoons. If you want to compete, you have to provide an offering in the way that kids expect.”

Even before she built her first toy, Sterling had conceived of Goldie as the linchpin of a retail and media empire to rival those of the most famous toy princesses and dolls. Now the question became how to bring Goldie to a broader audience of girls.

“We discovered that girls were living on YouTube and loved watching DIY [do-it-yourself]. We realized that if we could do DIY with a little STEM baked in, we could reach all of these girls pretty inexpensively with content they would love.”

Sterling has since developed “Hack Along With GoldieBlox” and other shows in which energetic hosts show kids how to make edible crayons, “snackable speakers,” “remote-control shoes,” and the like. The company has produced chapter books about Goldie and apps that help girls learn to code and create their own digital animation. The apps have been downloaded more than 1.5 million times; YouTube subscriptions to GoldieBlox channels have risen to over 200,000 in just six months.

When it comes to DIY, GoldieBlox practices what it preaches. It produced its early toys and videos in-house, though it has started employing a licensing model. Sterling credits engineering as the “added superpower” that helps her and her team move rapidly from concept to execution.

Sterling is sidestepping the traditional model for selling toys, in which a small group of big manufacturers, networks, and retailers use shows and advertisements to push the latest trinket. Instead, online media and sales platforms enable a small, young company like GoldieBlox to market quality content and products to a potentially limitless audience.

“Our content has a mission: to nurture the next generation of girls to get into science and math,” she says. “We’re inspiring Makers and showing them how to make. Products stem from that, but they do so in a natural and organic way.”

Building a Founder-Friendly Board

In 2015, GoldieBlox founder Debbie Sterling called Anik Guha, a partner in Orrick’s top-ranked Technology Companies Group, with a question. Two leading lights of the toy and media industries had offered to help her company grow. How could she bring them onto the board without losing control of her company?

At the time, Sterling was the only member of the board, and she had broad voting control over her investors’ shares. But GoldieBlox was growing and there was no substitute for the insight and experience that two women with deep industry experience could provide: Shawn Dennis, an executive at DreamWorks and a former CMO of American Girl, and Maxine Clark, founder of Build-a-Bear. With Guha’s help, Sterling structured the board so that Dennis and Clark were designated as board members by the holders of common stock, which is a vote that Sterling controls. In addition, Sterling was able to leverage a change to Delaware corporate law to retain multiple votes as a director and ensure continued voting control at the board level.

Having Dennis and Clark on the board—rather than just as advisors—has facilitated “a level of conversation and quality of ideas that has been extremely valuable for Debbie and the company,” Guha says. It also paved the way for Dennis to be appointed GoldieBlox’s president in April of this year. Since 2015, the GoldieBlox board has added two investor representatives and reflects a balance that is typical of a more mature company.

“As founder and CEO, what’s unique about GoldieBlox is how intertwined it is with me as a public figure and a persona,” Sterling says. “It’s really important that I have a level of control in the company. As companies mature and gain new investors, it’s common for founders to lose that. Orrick has helped to ensure I retain control and has protected my voice in major decisions, which is something our investors, advisors, and I all care about.”

Anik Guha, a partner in Orrick’s Technology Companies Group, represents high-growth technology companies in many industries through all stages of the life cycle. Anik has advised companies on hundreds of financing transactions, dozens of mergers and acquisitions, and numerous strategic and governance matters.

Anik is on the advisory board of Peer Resources, an organization that serves high school and middle school students in the San Francisco Unified School District. A native Ohioan and former New Yorker, Anik now lives with his family in Berkeley.

Mitch Zuklie serves as Chairman and Chief Executive Officer of Orrick. Under Mitch’s leadership, the firm has pursued a strategy to be a leading advisor to the global Technology & Innovation, Energy & Infrastructure and Finance sectors. Financial Times has chosen Orrick as the Most Innovative Law Firm in North America in 2016, 2017, 2018 and runner-up in 2019. And Fortune has selected the firm among the 100 Best Companies to Work For five years in a row.

Named by Chambers USA as an “eminent practitioner,” Mitch is an experienced business and legal advisor who has completed hundreds of venture capital financings and numerous public offerings, mergers, acquisitions and licensing transactions. He counsels technology companies at all stages of their life cycles, as well as their founders, advisors and investors.

Mitch has led the firm’s portfolio approach to innovation, including the transformation of its West Virginia operation into a center for analytics and innovation, the launch of Orrick Labs to develop customized technologies, and the creation of partnerships with leading innovation initiatives in the industry. He has also led the firm’s entry into new markets, including Boston, Santa Monica, Houston, Austin, and Geneva.

He and his wife, Holly, have been married for more than 25 years. They have two children, Hannah (20) and Angus (17). Mitch posts regularly on social media about Orrick, venture capital, innovation and other interests. Follow him on Twitter and Instagram.