In our latest episode, Public Policy Podcast hosts Michelle McGann and Jon Mandel rang in Women’s History Month with Vermont Senate President Pro Tempore Becca Balint, who has the distinction of being the first woman and first openly gay person to hold the position. Join us as we discuss her passion for civic duty and her latest experience being a part of a trailblazing, all-women leadership team in Vermont alongside the Speaker and Lieutenant Governor. We also dive into topics that include the legislative priorities of this session, the most recent federal stimulus package, managing the uptick in hostile rhetoric towards lawmakers and hate crime, and navigating a second legislative session remotely. 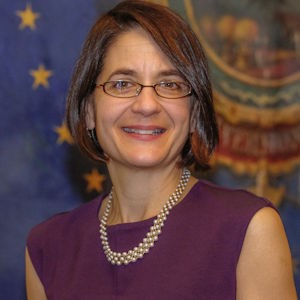 Senator Rebecca Balint was elected President Pro Tempore of the Vermont Senate on January 6, 2021. She is the first woman and first openly gay person to hold the position. She represents Windham County in the Senate.

Becca was born in a U.S. Army hospital in Heidelberg, Germany, where her dad was stationed. She was raised predominantly in upstate New York and attended public schools in Peekskill. She received her BA from Smith College in Northampton, MA, and earned her master’s in education from Harvard University in 1995 and her MA in history from the University of Massachusetts at Amherst in 2001. Her career in education has been spent teaching in public and private schools in New England, as well as at the Community College of Vermont. She first moved to Vermont in 1994 to lead rock climbing trips at the Farm and Wilderness Foundation in Plymouth and relocated permanently to Vermont in 1997.

Becca’s successes as Majority Leader include shoring up the votes to pass the largest Vermont housing bond in decades, which secured much-needed housing for hundreds and hundreds of Vermonters, and passing a minimum wage increase for thousands of low-wage workers. Becca also led the caucus through a successful fight for the most progressive reproductive freedom legislation in the nation, and she worked hard to pass the boldest climate justice bill to date in our State. Over the years, she’s also fought for protections for consumers, for renters, and for women in the workforce, and she’s been a strong advocate for additional workforce training programs that will assist Vermonters and small businesses.

When she's not running around the State House, she's running in Hubbard Park. Becca lives in Brattleboro with her wife, attorney Elizabeth R. Wohl, and their two children.