For our eleventh episode, Public Policy Podcast hosts Michelle McGann and Jon Mandel were joined by Missouri Senate Majority Floor Leader Caleb Rowden. Listen for our discussion on what topics the Missouri legislature will address in the upcoming special session, how schools at all levels in his district, including Mizzou, are preparing for Fall amid the ongoing COVID-19 crisis, and what additional arrangements the legislature advanced for the health and safety of voters for the upcoming primary election. 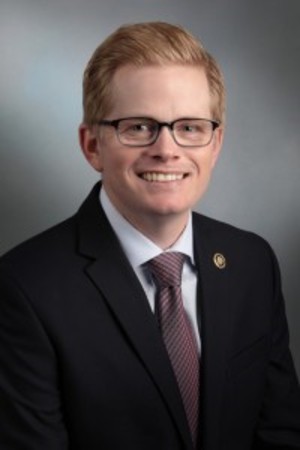 Caleb is married to Aubrey Rowden, the co-owner of Love Tree Studios, a wedding photography company based in Columbia, MO. They are proud parents to Willem Keane and Adele Lisette. In addition to his legislative duties, Caleb owns Clarius Interactive, a media and marketing company also based in Columbia.

Caleb has spent his life in service to others. He enjoyed a successful career in full-time ministry as a touring Christian singer/songwriter. During that time, he played in 45 states, selling thousands of records and garnering two top 20 national radio hits. He also participated in multiple mission trips, ranging from serving the homeless in Atlanta, GA to a month-long internship ministering to the people of Reynosa, Mexico.

Caleb has been steadfast in his support for K-12 and Higher Education and has played a significant role in creating a positive environment for Missouri’s small businesses by championing and passing major tort and regulatory reform. Caleb is committed to making mid-Missouri and the state as a whole the best place in the country to live, work, and raise a family.