For our thirteenth episode, Public Policy Podcast host Rob McKenna was joined by Montana Attorney General Tim Fox. Join us as we discuss his leadership of the National Association of Attorneys General (NAAG), how multistate AG investigations have shaped industry trends, and how his office is making progress in the fight against human trafficking. 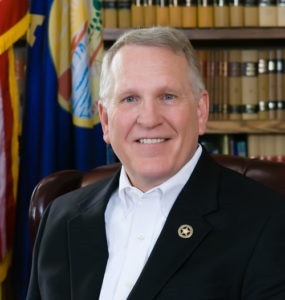 Montanans first elected Tim Fox as the state’s 24th attorney general in 2012 and he was reelected to a second four-year term in 2016 with a 36% margin of victory. As attorney general, Tim leads the Montana Department of Justice and its nearly 800 dedicated public servants. In his 30 years of experience as a Montana attorney, Tim has litigated numerous complex cases for individual Montanans and Montana businesses and has devoted considerable time to providing pro bono legal services to Montanans who cannot afford an attorney, and to charitable and faith-based organizations.

Tim was born in 1957 to a hard-working Hardin, Montana family. Like many kids in small agricultural communities, Tim began working at a young age and soon developed a strong work ethic thanks in part to the Depression-era work ethic of his parents, Rich and Roberta Fox.

Tim is a three-time graduate from the University of Montana, with degrees in geology, law, and most recently, a Master’s in Public Administration. After serving as a law clerk to Associate Justice L.C. Gulbrandson of the Montana Supreme Court, Tim began practicing law with the Billings, Montana law firm of Moulton, Bellingham & Longo. He first entered public service in 1990 when recruited to develop a new environmental regulatory program for the Montana Board of Oil and Gas Conservation. After three years as a State of Montana employee, he established a solo law firm in Billings, where he served as a contract public defender for the City of Billings practicing criminal law in addition to maintaining a civil law practice.

Tim and his family moved to Helena in 1995 to assist then-Governor Marc Racicot in his bid for reelection. Shortly after arriving in Helena, he went to work for the Montana Department of Environmental Quality as a Special Assistant Attorney General. In 1999, Tim was hired as VicePresident and Legal Counsel for a Helena-based national bank, Mountain West Bank. He served in that position for over four years before re-entering private practice with the law firm of Gough, Shanahan, Johnson and Waterman, PLLP.

He and his wife, Karen, have four children and six grandchildren.

Rob represents a wide range of technology, energy, finance and other companies in matters involving cyber security, data privacy, litigation, appellate litigation, regulatory proceedings, state attorney general investigations and legislative issues. His experience, stature and expertise add essential capabilities for clients seeking coordinated policy advocacy, regulatory compliance and litigation strategies in state capitols across the country and in Washington, D.C., where he has testified before Congress and assisted clients who have been called to testify before Congressional committees. While at Orrick, Rob has represented clients in both state and federal court, typically in cases centered on constitutional questions.

Our State AG team dissects ways state AGs are playing an active role enforcing state laws during the C-19 pandemic and as states begin to reopen.