Japan Renewable Alert 49:
Arrangements for the Nullification Rule and Expansion of the Scope of the COD Deadline Rule Now Open for Public Comments

On September 7, 2020, the Ministry of Economy, Trade and Industry (“METI”) announced the draft outline of the amendments to regulations regarding the introduction of arrangements for the Nullification Rule (described below), to be effective on April 1, 2022 (the “Effective Date”), and other points (the “Draft Outline”), which is open for public comments until October 6, 2020 (see here, available only in Japanese).

The Nullification Rule, intended to invalidate a FIT/FIP approval if the project fails to commence operation within a certain period of time from the approval (the “Nullification Period”), is to be introduced by the Act to Partially Amend the Electricity Business Act and Other Acts in Order to Establish a Resilient and Sustainable Electricity Supply System (Act No. 49 of 2020; the “Act”) amending the Act on Special Measures Concerning Procurement of Electricity from Renewable Energy Sources by Electricity Utilities (Act No.108 of 2011, as amended, also known as the FIT Act) (the “REA”) (see Japan Renewable Alert 44). The specific length of the Nullification Period and the treatment of existing projects are not provided in the Act itself but are instead to be provided in METI’s ministerial order.

The Draft Outline, in addition to (1) the expansion of the scope of the “new rule” for countermeasures for nonoperating solar projects, which had been previously scheduled, includes (2) detailed arrangements for the Nullification Rule and (3) the expansion of the scope of the COD Deadline Rule (described below). It lays out the outline of the draft amendments to the Rule for Enforcement of the REA (METI Ministerial Order No.46 of 2012, as amended; the “REA Rule”) and the Public Notification to Designate Procurement Prices, etc., based on the REA (METI Public Notification No. 35, 2017, as amended; the “Public Notification”), reflecting the discussion made at the METI expert panel held on August 31, 2020 (the “August Session”).

2. Arrangements of the Nullification Rule

As we reported in our previous Japan renewable alerts (see Japan Renewable Alerts 47 and 48), the uncertainty regarding the details of the Nullification Rule has caused serious adverse effects on project financing of renewable energy projects in Japan. In the beginning of July 2020, amid such crisis, we supported our clients in preparing and submitting opinion letters to METI and other relevant authorities asking them to promptly take reasonable measures. METI saw the seriousness of the matter and presented its draft plan at the session of the expert panel held thereafter on July 22, 2020, and at the August Session to obtain approval from the members of the panel, and then announced the draft outline of the ministerial order to amend the REA Rule regarding arrangement for the Nullification Rule, without waiting for discussions on other topics.

At the August Session, METI suggested that the new system should distinguish projects that are expected to commence operation from those that are not expected to do so, and proposed the concept of making such determination based on whether sufficient progress has been made at the point falling one year after the COD deadline. The draft arrangements shown at the August Session are as follows (see the chart below (based on Material 3 (p.10) prepared by METI for the August Session)), based on the assessment of how much additional time (the “Grace Period”) it is appropriate to add to the period up to the COD deadline (the “COD Deadline Period”) (Nullification Period = COD Deadline Period + Grace Period). 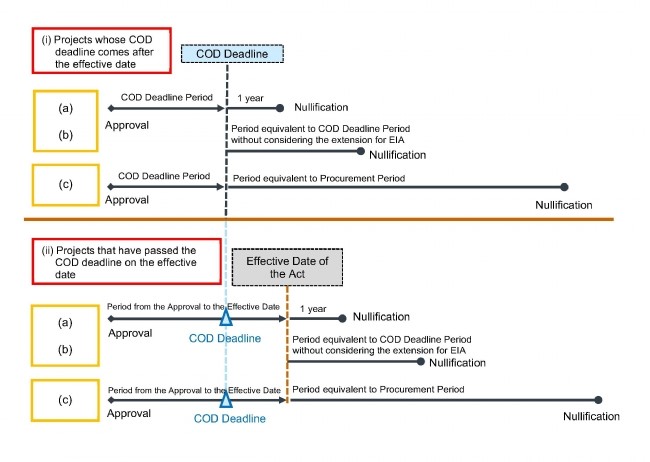 The direction shown above is reflected in the Draft Outline. Based on the above concept, the Nullification Period for solar projects for each category in (i) above, for example, is set to be (i)(a) four years (six years if subject to environmental impact assessment procedures required by national law (the “National Law EIA”)), (i)(b) six years (eight years if subject to the National Law EIA) and (i)(c) 23 years (25 years if subject to the National Law EIA), corresponding to the categorization shown above. In addition, regarding (c) above, the Draft Outline shows that the public procedure that confirms commencement of construction can be either due acceptance of a CPN or the advisory opinion of the METI regarding preliminary documents for the National Law EIA, and that businesses can choose either option if both of them are applicable to the project.

At the August Session, METI proposed that the scope of the COD Deadline Rule should be expanded to those Non-Solar Projects approved in or prior to FY2017 that are currently not subject to it, which was incorporated into the Draft Outline. The Draft Plan states that the COD Deadline Rule is to make these Non-Solar Projects subject to COD deadlines with the same duration as the current COD Deadline Period commencing on the effective date of the promulgation of the amendment to the Public Notification. Such amendment to the Public Notification could be promulgated within this year.

Numerous new systems that could have a huge impact on renewable business are scheduled to be introduced amid this transition period of the entire energy regulation system. Renewable businesses need to comprehend the contents and the background of these various amendments and, if necessary, communicate with authorities about the practical situation they are experiencing to guide the coming era.

Minako plays a vital role in the rise of Japan’s renewable energy market.

Minako has significant experience advising international and domestic sponsors and developers on complex and innovative projects. She was called upon by the Japanese government in structuring the renewable Feed-in-Tariff scheme in Japan and prepared the government’s model contracts for specific contracts (power purchase contract/interconnection contract), which are a key component of the Feed-in-Tariff scheme in Japan.

Backed by her experience in her prior career as a public prosecutor in Japan, she also serves as a member of the Tokyo Metropolitan Government Supervising Committee for Public Bidding (Tokyo-to Nyusatsu Kanshi Iinkai) which advocates public rights to the fairness and adequacy of the public bidding procedures of the government. Minako practiced at Orrick's New York office in 2004-2005.

Gohshun Kawamura is a managing associate in Orrick’s Tokyo office and a member of the Energy and Infrastructure Group.

This Alert Letter outlines a huge tide of changes in the regulations for renewables and what to watch out for in the coming years.

Japan Renewable Alert 47:
The Nullification of Approvals
Under the Amended FIT/FIP Act

The Nullification of Approvals Under the Amended FIT/FIP Act

I. The Details of the Nullification System and the Amendments to the Operational Practices (Stricter Policy on Detached-Site Projects) II. Four ...

On January 15, 2019 the Review Committee on Basic Policy Regarding Solar Facilities and the Environmental Impact Assessment (the "Review Committee")...

Japan Renewable Alert 47: The Nullification of Approvals Under the...

The Nullification of Approvals Under the Amended FIT/FIP Act