The Bill proposes to cut the taxes of U.S. multinationals by:

Under a worldwide system, a U.S. person is taxed on all income wherever earned, whereas under a territorial system, a U.S. person is taxed only on income properly allocable to, or "sourced," to the U.S. The funding to pay for these massive tax cuts would come, in large part, from a tax to be imposed on the repatriation of the almost 3 trillion dollars that U.S. multinationals are currently storing offshore in related subsidiaries. However, the repatriation is, in a way, forced – as the tax will be payable on such cash regardless of whether or not the cash is actually repatriated to the U.S.

U.S. owners would be treated as receiving a deemed dividend (the "Mandatory Inclusion") from these foreign subsidiaries, regardless of whether any distributions are actually paid (in tax lingo, a "dry income problem").

Under the Bill, in the case of a 10% U.S. shareholder that is a corporation, the rate of tax on the Mandatory Inclusion will be 15.5% on cash equivalent assets and 8% on non-cash property, by virtue of a complicated deduction based on a 35% corporate tax rate.

The amount of the inclusion would be based on the greater of the foreign subsidiary earnings as measured on two dates, the first being November 2, 2017 and the other being December 31, 2017.

In principle, the Mandatory Inclusion makes sense in the case of U.S. multinationals, who could distribute cash as needed in order to pay the tax on the dry income, but appears to represent a trap for the unwary for investors in certain funds.

For partners in U.S. PE funds that are in turn investors in offshore companies, the actual language of the proposals would apply to such partners too, causing a potentially unexpected tax hit.  While the Mandatory Inclusion appears to have been motivated by the desire to tax the "trapped" offshore income of U.S. multinationals, the statutory language of both the House and Senate Bills would cast a much wider net.

Who, Exactly, is Impacted?

Under both bills, the Mandatory Inclusion only applies to investments in so-called "deferred foreign income corporations" (DFICs). A DFIC in turn is a "specified foreign corporation" that has deferred income with respect to which a person is a U.S. shareholder who holds 10% (by vote) of such corporation. Simply put, in order to be subject to the Mandatory Inclusion, two elements need to be present: the taxpayer must be (1) a "10% U.S. shareholder" of (2) a "specified foreign corporation."

A Technical Trail of Definitions

New attribution rules would apply which would treat a U.S. corporation as owning stock owned by its foreign shareholders, making both 10/50 and CFC status more likely. The combined effect of these rules would be to trigger a Mandatory Inclusion to many U.S. minority stockholders of companies that are largely foreign owned.

The following diagram depicts the rules as they were "meant" to apply in the case of a U.S. multinational that holds all of the stock of certain CFCs. 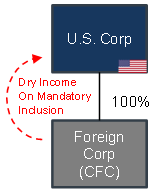 In this example, the U.S. multinational corporation (U.S. Corp) would take into income a taxable deemed dividend from its wholly owned CFC. To the extent needed, it could force the CFC to pay actual dividends in order to cover the tax on this dry income, and, importantly, the actual dividends would not be subject to an additional level of tax. At the election of U.S. Corp, the tax on the Mandatory Inclusion would be payable under an 8 year installment plan, with 8% of the total liability due during each of the first five years, 15% in year 6, 20% in year 7, and the final 25% in year 8.

The second example shows a more challenging fact pattern that would also give rise to a Mandatory Inclusion under the current wording of the Bill. 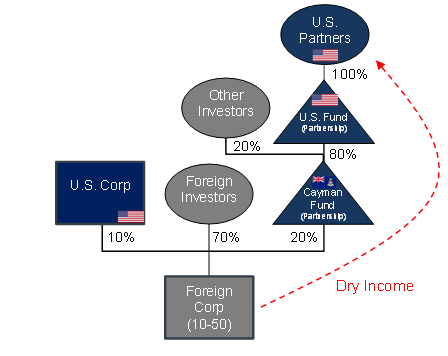 The effect of U.S. Fund being a 10% U.S. shareholder is that all U.S. Partners in U.S. Fund will have Mandatory Inclusions on an investor by investor basis, even if their allocable indirect share of the Foreign Corp is far less than 10%.[2] Moreover, a minority partner in US Fund may not have the power under the Fund Agreement to compel tax distributions which might be necessary for him to pay the tax on this dry income.

In summary, the potential tax liability, disassociated from a cash distribution, will be an unwelcome surprise for those not aware of this potential, assuming enactment of the tax reform bills as proposed.

Tax May be Due Soon

U.S. partners of funds affected by the Mandatory Inclusion will likely want to elect to take into account the inclusion on the 8 year installment basis on the schedule described above. While the first five years of the schedule would allow for the most modest inclusions (i.e., 8% of the total inclusion), taxpayers will note that the first installment will be due with respect to 2017 – i.e., the cash outlay will be due by April 15, 2018. Potentially affected funds will want to note this and plan accordingly.

The Amount of Tax Due May be More than Expected

As mentioned above, the 15.5% and 8% rates applicable to corporate 10% U.S. shareholders are essentially "backed into" by virtue of a complicated deduction, which is based on the top 2017 corporate tax rate of 35%. However, the top tax rate for individuals for 2017 is 39.6%, with the result that different rates will apply to them. Rather, an individual partner taxed at 39.6% would instead be subject to effective rates on the Mandatory Inclusion of approximately 17.5% in the case of cash and 9.05% in the case of noncash property instead.[3] Moreover, the effect of possible rate differences resulting from situations in which shareholders and DFICs have different fiscal tax years will have to be considered as well.

Mitigation Measures:   Tax planning to mitigate these unintended effects is likely complex and difficult and affected entities/individuals are encouraged to seek professional advice.

[1] Note that there would be no mandatory inclusions to any of the partners in US Fund on these facts if US Corp were instead treated as a US partnership for tax purposes, because on such facts there would be no specified foreign corporation (i.e., Foreign Corp would be neither a 10/50 company nor a CFC). This requirement - that there must be at least one 10% U.S. corporate shareholder in order to trigger these rules - may be a saving grace for some funds.

[2] However, the actual amount of the Mandatory Inclusions to the U.S. partners in U.S. Fund will be based only on their actual allocable shares of the U.S. Fund.

[3] It will also be important for affected funds to understand how to determine which portion of the underlying foreign corporation's assets are cash versus noncash property, as the rate differential is substantial. This issue will be the topic of a separate alert to be published shortly.