Following the recent event over the weekend (27/28 June 2015), we set out below a short guide on the current status in Greece.

Months of negotiations on a deal to restructure Greece’s debts appear to have failed. Greek Prime Minister Alexis Tsipras has called a referendum for 5 July 2015 on the draft bailout proposals (the "Proposals") from the EU[1]. Mr Tsipras' government will campaign against the Proposals, which require a number of measures relating to VAT increases, budgetary restraints, pension reforms and privatisation measures.  On Saturday, 27 June 2015, Eurozone finance ministers refused to extend the current EU bailout programme which expires on 30 June 2015. In response, on Sunday 28th July 2015 the Greek government announced the imposition of capital controls.

Greece is due to make a €1.6bn (£1.1bn) payment to the International Monetary Fund ("IMF") on Tuesday (30 June 2015) – which is the same day that its current bailout programme expires. It is hard to foresee a realistic scenario where this payment will be made on the due date.  In addition, another payment is due to the ECB, of €3.5bn repayment, on 20 July 2015. In recent months, Greek banks have been kept on life support by drawing down under the ECB's Emergency Liquidity Assistance ("ELA") programme. However the rules governing the ELA mean further draw downs cannot be made if the ECB considers Greek banks to be insolvent.

€89bn under the ELA programme has been made available to Greek banks given the massive withdrawals which have been made since the renegotiations on a new Greek bailout began (by the end of May 2015 private sector deposits in Greek banks had fallen to €130bn from €164bn in November 2014). ELA is exceptional funding which is not provided under the ECB's usual direct refinancing operations. Whilst collateral is required for ELA funding the quality of such collateral is not of the same quality than would be required for the ECB's other facilities. On Saturday 27 June 2015 the ECB announced it would cap its ELA programme rather than increase it to cover emergency assistance for the banks which meant given, the velocity of cash withdrawals in recent days and in the absence of other sources of liquidity, capital controls became inevitable.

Following the failure to agree on Friday 26 June 2015 at a meeting between the Greek finance ministers and the Euro Finance ministers, Prime Minister Alexis Tsipras’s government announced that it would hold a referendum for the Greek people to vote on the Proposals. The Prime Minister announced his government would campaign against the Proposals. Rather confusingly the EU appears to have taken the proposed bailout offer off the table and so the Greek people face the prospect of voting in a referendum on a deal which is not technically available.

What Are the Details of the Capital Controls?

The Government Gazette Legislative Act[2] issued on 28 June 2015 (the "Control Legislation") stipulates that there will be a Bank Holiday until 6 July 2015. How these measures operate in practice will become clear in the next few days. The key provision is that cash withdrawals from ATMs will be subject to a €60 daily limit. Transactions via internet or phone banking within Greece are permitted as are debit and credit card transactions to the credit of a Greek account. Cash withdrawals from ATMs through cards issued abroad will be permitted although the Minister of France will set out a decision on how this works in a separate decision. In addition, a committee for the Approval of Bank Transactions will be set up to review one off "necessary" transactions. The Control Legislation sets out the sanctions for violating the controls, being a fine of 1/10th of the amount of the transaction and the termination of the employee's contract for bank employees.

In 2013 controls were imposed in Cyprus which provided that Cypriots could only withdraw €300 per day.

In addition Cypriots travelling abroad could only take €1,000 out of the country, while payments and/or transfers outside Cyprus via debit and/or credit cards was permitted only up to €5,000 per month.

Capital controls were lifted in April 2015. Iceland provides another recent example of the imposition of capital controls which were put into effect in 2008 at the height of the financial crisis. These remain in effect to this day although Iceland has recently announced its intention to release these controls in the near future.

Capital controls undermine one of the key founding concepts of the EU - the free movement of capital. However in the case of Cyprus, which remains in the Eurozone, the European Commission permitted the imposition of such controls to prevent destabilisation of the European economy. Article 63 of the Treaty on the functioning of the European Union (TFEU), prohibits the imposition of restrictions on the movement of payments and capital between EU Member States. One of the exceptions to this requirement is that each Member State has the right to "take measures which are justified on the grounds of public policy or public security" (Article 65(1) of TFEU).

The imposition of capital controls - and even a default of payments to the IMF - does not inevitability mean that Greece will leave the EU. There is no specific mechanism envisaged for an exit. ECB Vice President Vitor Constancio stated in April 2015 that if Greece defaulted on its debt there was no legislation that required its expulsion.

We cannot predict the effect that the situation will have on market sentiment. It is notable however that the main creditors of Greece are European nations, the IMF and the ECB. The private sector (mainly in the form of hedge fund bondholders) is owed only 15% of the total approximately €320bn of Greek debt. 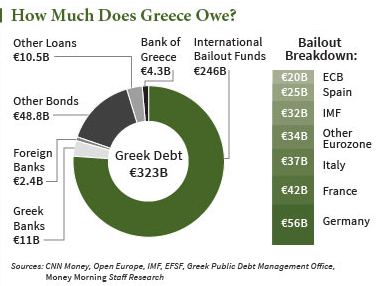 Default would mean a sizeable loss for the ECB, although the ECB does hold collateral in support of these loans. For the Greek economy the picture is highly fluid. There is an undeniable risk that Greece will be forced to exit the EMU. It is conceivable that even if Greece defaults on the upcoming IMF payment and long term capital controls are imposed, Greece can stay within the Eurozone. If the referendum goes ahead and the result is an acceptance of the Proposals it will be hard to see how the current government (which will recommend a rejection of the currently proposed deal) will survive. In this scenario a new government might take control and the negotiation might start again.

At the moment, it is hard to get a clear overview of how the situation plays out. However, a number of questions immediately arise:

Market participants, regulators and the ECB will continue to monitor the situation carefully. It should be remembered that the exposure of EU banks and other private sector players to the Greek system is limited. We would expect the ECB/IMF will be working hard to ensure that a Greek crisis does not turn into a wider systemic crisis.

Raniero D’Aversa is chair of Orrick’s Restructuring group. He is a market-leading practitioner in bankruptcies, out-of-court restructurings and creditors’ rights controversies and brings years of experience representing DIP lenders, secured lenders, bank groups and hedge funds in those capacities.

Douglas has represented clients before the European Commission and the Competition and Markets Authority for more than 20 years in all areas of competition law. He provides multinational clients with innovative solutions on high-profile complex matters including merger control, abuse of dominance, private damages actions and cartel investigations, often involving multiple jurisdictions. He founded our Brussels office.

Douglas has acted for clients in a broad range of industries, including software, technology, telecommunications, manufacturing, consumer goods, energy, healthcare, and defence.

Douglas advises on the UK national security regime. He has contributed to working groups organized by the Department for Business, Energy & Industrial Strategy and the Parliament’s Foreign Affairs Committee on the National Security & Investment Bill.

Douglas has been recognised as a leading antitrust and competition practitioner by Chambers. He is known for being "skilled, easy to work with and very service-minded". GCR’s Who’s Who Legal recognises Douglas as “an excellent technical lawyer in the competition space”. Douglas is also ranked as a leading competition lawyer in Legal 500 UK 2021, described by one client as "very experienced and good at finding strategic and practical solutions".

Mr. Mathews, a partner in Orrick’s New York office, serves as Global Co-Head of the Derivatives group. He is also a member of the Structured Finance, Banking and Finance, and Energy and Infrastructure groups.

Simon has wide experience of acting for major financial institutions, companies and professional firms in complex litigation, investigations and proceedings by domestic and overseas regulators, professional disciplinary proceedings, ad hoc governmental inquiries and internal investigations. In particular he has acted for those subject to investigations by a wide range of regulatory bodies including the Financial Reporting Council, the Financial Conduct Authority, the Prudential Regulation Authority, the Serious Fraud Office, the Securities and Exchange Commission, the Public Company Accounting Oversight Board and others. He has considerable experience of advising clients on risk management and reputational risk arising from contentious matters.

Simon has been recognised in the Legal 500 and Chambers & Partners as: “an outstanding litigation solicitor”,  who is “highly experienced in conducting heavy litigation”, and “one of the best lawyers operating in the Accountant’s liability space”. His clients describe him as “tactically astute and painstaking" and “tough, hardworking, well informed and highly tactical in his thinking.” with a “winning combination of legal knowledge and practicality”.